I'd like to congratulate the MeeGo team on shipping MeeGo 1.0 for Netbooks! It's nice to see user-experience-driven design on Linux (where it tends to be conspicuously absent), shipping in a complete product. It really shows, too -- the UI is extremely responsive and it makes the whole experience a joy.

Thanks to Intel hiring Collabora for some MeeGo work, I made a few contributions to the distro some months back. Some were evolution data server code clean-up, adding tests, etc. For the interesting, user-visible changes (that I didn't work on), see Michael Meeks's post about Evolution in MeeGo.

But the more visible contributions were to Empathy's account settings. Originally, Empathy's "first-run" account setup wizard and accounts settings dialog were in the same process as Empathy. This meant you had to launch Empathy before you could edit your accounts, which is a little awkward if you're another application. Telepathy accounts aren't Empathy-specific, so it makes sense that the dialog be independent (though it still lives in the Empathy source tree). 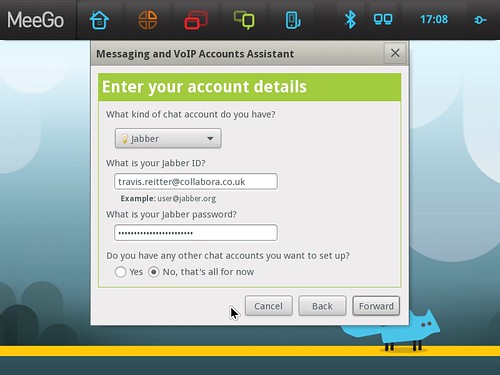 Thomas Wood's unified Control Center work appears MeeGo, and I adapted the Empathy accounts dialog to embed in it. The screenshot is fairly self-explanatory. When you access the accounts from the Control Center, you get a nice, full-screen version of the dialog: 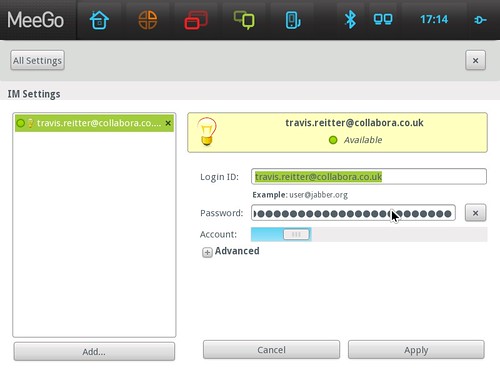 Michael Meeks mentioned how small most netbook screens are. When you also factor in the MeeGo panel at the top of the screen, you can get situations where you need scrolling (but didn't on the full-sized desktop). So we added a scrollable view to the accounts dialog (to fit the full content of the Advanced section for protocols with a bevy of bells and whistles): 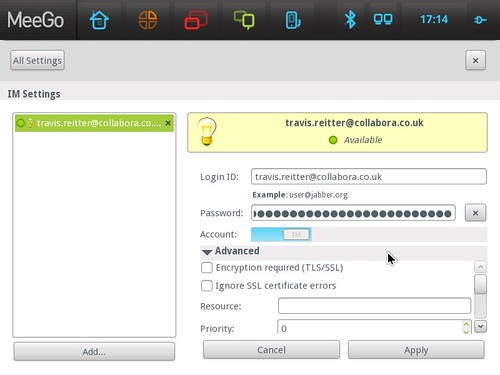 Since the actual dialog content is the same whether it's embedded or not, the same functionality works when it's stand-alone as well: 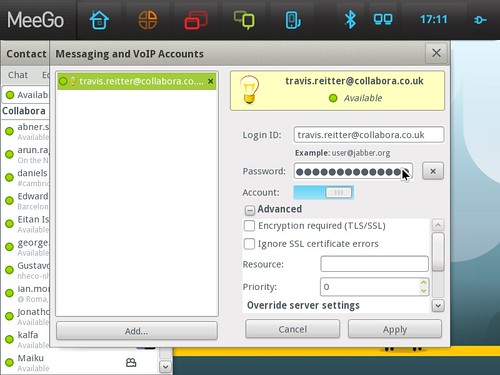 And because the MeeGo team understands open source software, these features were developed out in the open and have been included in the last few releases of Empathy. So if you don't have them already, you will soon!
Collapse